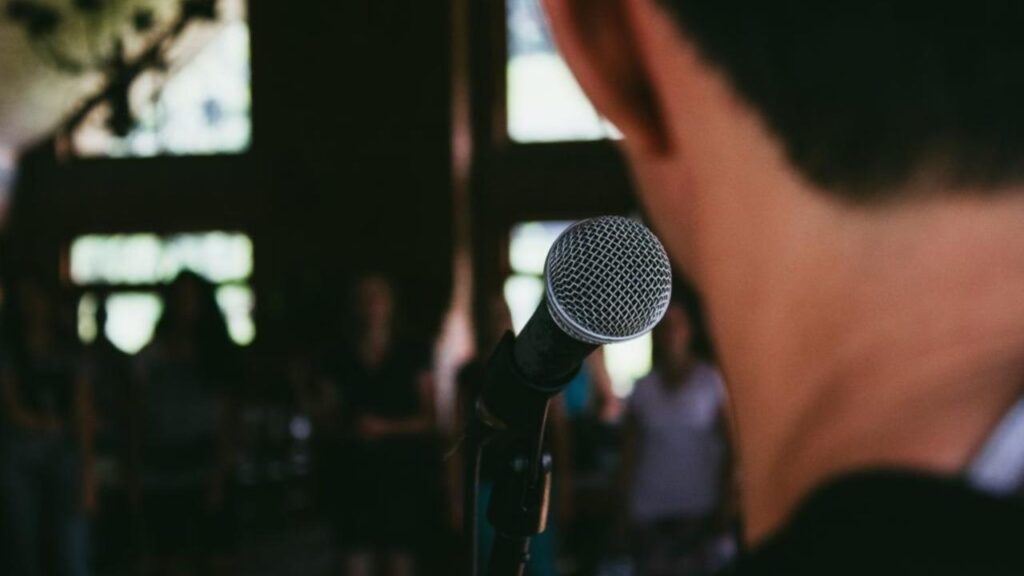 How To Keep Your Audience Connected To Your Message

He had a lot of energy and he was interesting.  There were even a few moments during the 7 minute speech where he had the audience laughing.  I could hear them on the video.  Honestly, it was a good speech.

If the camera person kept having to do this with his camera, what was it like for the audience?  Did they get dizzy?

The man on the stage giving the speech was me.  I was watching myself give a talk to some high-school students.  A friend of mine sat in the audience with my phone, recording the talk for me.

I was shocked at the amount of movement, not because I wasn’t supposed to move.  It was just quick, abrupt and a LOT.  I’d rush to one side of the stage, then quickly do a military pivot and move back to the other side.  It went on like this for the entire speech.  Yes, I was energetic.  But, I imagine that vocal energy added to my pacing may have made it a bit overwhelming.  I was filling up just watching the replay.

Pyschologist, Dr. Sunna Jung, shares that pacing is, “a behavioral signal to tell yourself that you’re too overwhelmed.”  She also notes it can be a “form of distraction in the moment to calm yourself down.”  As a speaker, being calm is important.  Coming across as confident is critical for the tone of your message.  However, the distraction mechanism of pacing also causes the audience to be distracted.  Remember, they are trying to connect with you.  So, constant pacing causes them to have to chase you.

Should you stand still like a robot in the middle of the stage or the room?  No, of course not.  Instead, move with purpose.

Let’s say that you are in the center of the stage and you say, “I’ve got three quick points, I want to share with you.”

Move to the right side of the stage (your right, their left).  Then begin, “Point number 1…”

You are now subtly anchoring that point to that side of the stage.  You might even add on by coming back to that side in a later reference to the point.

As you complete point #1, pause and let the idea sink in.  Transition to the center of the speaking area as if you are preparing to deliver the next power-packed piece of content.  Once you arrive, plant yourself and say, “The second point I’d like to share is…”

Again, as you complete point #2, pause, then transition to the left of the stage.

“The third and final point…”

Second, you’ve honored their normal style of reading and information reception, left to right.  (Assuming this is a western audience)

Third, you given them space to separate ideas and process them.

Speaking from a stage or from the front of a room can be unnerving.  But your job isn’t to transfer that nervousness to the audience or show them how hard it is to be up front.  Your job is to clearly and confidently connect with them, showing them you see, feel and hear their problem.  Then you can show them your solution to the problem.